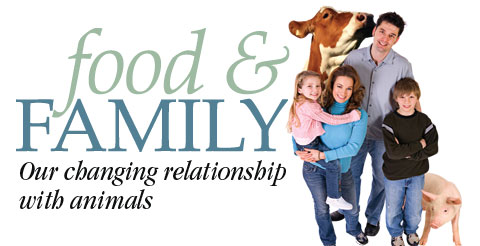 OSU Department of Animal Sciences celebrates 100 years of science as it explores our changing relationship with animals.
By: Peg Herring
Twitter Facebook Google+

The golden retriever asleep at your feet; the free-range chicken you ate for lunch; the 99 percent of your genes you share with chimpanzees. These things and more define the relationship between people and animals, a long and complex relationship that involves food, industry, labor, companionship, and love.

One hundred years ago, animals were a part of every farm in Oregon. Crops fed animals, whose manure nourished the soil, which in turn nourished new crops. That intertwined relationship ended following World War II, when chemical fertilizer replaced animal manures and petroleum replaced horse power. Since then, our relationship with animals has split between the industrialization of food animals and the creation of a pet industry. In the last 20 years, public concerns over animal welfare and environmental protection have prompted changes in the way animals are raised as food and as companions. These and other changes are reflected in the research, extension, and teaching at OSU Department of Animal Sciences, which celebrates its 100th anniversary this year.

Certainly one noticeable difference is that women now make up four out of five undergraduate students who enter the department, according to department head Jim Males. For many of these students their first experiences with animals have been with pets or horses, and many come to animal sciences with the dream of becoming a veterinarian.

“One of our challenges is to show students the range of career options that are open to animal scientists,” Males said. Applications of modern animal science range from biomedical research to the production and inspection of the nation’s food supply. Animal scientists are among the first responders to public health threats of bioterrorism and pandemics. Some are helping to design better zoos and animal shelters, while others are working to develop more nutritious meat, eggs, and dairy products.

“Animal science students at OSU get a strong background in the biological sciences to prepare them for a wide range of careers,” Males said.

This is no PowerPoint education. As a land-grant university, OSU maintains several animal facilities off campus, including a working dairy, a horse center, a sheep center, a poultry farm, and a beef cattle ranch, where students can work hands-on with animals. The university’s farms function as laboratories for teaching and research, and they provide opportunity for students to experience the day-to-day business of managing an animal industry. Each spring at the OSU Sheep Center, for example, when daffodils start to nose out of the ground, students keep a round-the-clock vigil while 120 ewes go about their business of eating, sleeping, and having lambs. For some students, this is their first experience with livestock birth.

“These are not things you can learn from a textbook or a lecture hall,” said Leticia Hillebrand, a senior who will be entering OSU College of Veterinary Medicine next year. Leticia came to OSU from Germany where, she says, the opportunity for hands-on animal research and teaching is much more restricted.

At OSU, students have the opportunity to help milk a herd of Holsteins and Jerseys, manage a herd of steers for beef, and train young colts from halter broke to trail ready, at the same time the students learn about the business side of various animal industries. There are laboratories where students can develop and test their own recipes for cheese and sausages, and research labs where scientists explore the biochemistry of animal nutrition, fertility, and behavior.

The study of animal sciences goes back more than 100 years to the study of animal husbandry, the care and feeding of livestock that were the backbone of Oregon’s agricultural economy at the turn of the 20th century. James Withycombe, a professor of agriculture and the state veterinarian, understood the importance of a scientific approach to studying animals when he was named to direct the newly formed Agricultural Experiment Station at Oregon Agricultural College in 1898. Withycombe, who later served as Oregon’s governor, helped establish the college’s first dairy and a creamery to demonstrate scientific advances in milk, cheese, and butter production, as well as a horse farm for studying draft breeds and cattle herds for studying improved beef production.

The early history of the animal sciences at OSU can be illustrated by one famous chicken, Lady MacDuff. Her 1913 record-breaking performance, laying 300 eggs in one year, was a result of a specialized breeding program and put Oregon Agricultural College on the map.

The success of Lady MacDuff characterized the breakthroughs that modern science brought to the art of animal husbandry throughout the United States during the 20th century. Better understanding of animal nutrition and genetics led to remarkable increases in production of eggs, meat, and milk. New technologies that followed World War II greatly expanded the production of grain and made it possible to expand animal production to an industrial scale. By the 1960s, single-species factory farms were beginning to replace small mixed farms across the nation. The large scale of these new animal industries offered many advantages, including staff nutritionists and veterinarians, to oversee animal health, and fair labor practices for employees. As a result, consumers for the first time had a plentiful and relatively inexpensive food supply.

However, there was another side to animal agriculture that was often ignored by animal scientists and large-scale producers: concern for animal well-being.

“It has been obvious for 15 to 20 years that the public’s perception about farm animals has changed and continues to change,” said Steve Davis, a professor emeritus in the department. “The change seems to be in the direction of compassion toward the way animals are treated and concern whether contemporary animal agriculture is doing them justice.”

About 15 years ago, according to Davis, the American Society of Animal Science initiated a new section in their journal entitled “Contemporary Issues” to address society’s concern for farm animals and their welfare, and later added the topic of “Animal Bioethics” to their annual meetings. In response to this growing interest among the profession, the Animal Sciences Department at OSU introduced courses to examine contentious issues and ethics in animal agriculture.

So, what’s the beef with the old way of producing meat and dairy products?

The old way separated people from their food. But increasingly consumers want to know that the animals that nourish them are humanely treated—even fast-food customers, apparently.

“McDonalds and Burger King are leading the restaurant industry for certification of humane production practices,” Males said. “As more industries demand certification, there’s a growing need for animal scientists to provide that certification.”

Where production efficiency was once the main focus of teaching and research, there is now increasing emphasis on animal care and environmental quality, according to Mike Gamroth, an OSU Extension specialist in dairy management. Beef cattle and forage for feeding them are two of the top grossing agricultural industries in the state, and Oregon is third in the nation in the production of organic dairy products. Increasingly, consumers are willing to pay a premium price for products from animals that are raised sustainably, with attention to the well-being of the animal and the environment.

“This is a time of reevaluation in the beef industry,” said Chad Mueller, a professor of cattle nutrition at OSU. “The industry is more accountable because consumers are more aware of where their food comes from. So the industry is reevaluating their standard practices. We challenge our students to do the same thing.”

And it’s not just beef. There is a growing niche market for cage-free pork, chicken, and eggs. These new trends are opening new careers for animal scientists, including inspectors and third-party certifiers to guarantee to the consumer that stricter rules for animal welfare are being followed.

“Public perceptions are a very real part of the political arena in which farm producers must operate,” said Candace Croney, a professor of animal behavior at OSU. “Society’s concerns for animal welfare are beginning to change production systems to accommodate the mental and physical needs of animals.”