Oregon State University is number one in the nation in the agricultural sciences, based on the citation impact of its scientists’ published research, according to a recent report published by Science Watch.

The ranking, produced by tracking trends and performance of the top 100 federally funded U.S. universities, is based on the number of times scientists cited OSU research in peer-reviewed journals. The impact score, calculated as citations-per-page during a four-year period, is reported for 21 fields of science. For example, during 2001–2005, Yale University had the highest impact for law; Harvard had the highest impact for clinical medicine.

For the agricultural sciences, Oregon State University had the highest impact, followed by the University of Wisconsin, Cornell, Rutgers, University of California at Davis, and Penn State.

“This ranking demonstrates the important work our researchers are doing and their recognition as the top experts in their fields,” said Thayne Dutson, dean of OSU College of Agricultural Sciences. 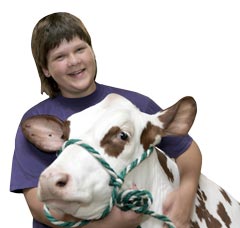 A new study by Oregon State University has found that county fairs contribute to local and statewide economies both by generating local dollars and by building social capital.

“The idea of a county fair goes back to the medieval marketplace, where people from the countryside gathered to be entertained and exchange goods and information,” said Bruce Sorte, an OSU Extension economist in the College of Agricultural Sciences. “Later, fairs staged competitions among crop and livestock breeders, and became the place where people learned new techniques to produce goods. Similar interactions are still going on in county fairs today.”

Sorte analyzed the flow of goods and services created by county fairs in different parts of Oregon. He found that expenditures at county fairs and year-round fairground events leveraged economic activity at a rate of 1 to 5 or more.

Among his calculations of expenditures, Sorte included a characteristic transaction of county fairs, namely the purchases by local people of local goods and services. These purchases retain dollars in the local economy and replace purchases of imported goods that send dollars out of the county. So-called “import substitution” can be just as valuable to the local economy as exports, according to Sorte. And local goods that are popular with local consumers may eventually become exports and bring new income into the local area.

“County fairs are one of the few bright spots in the economy where local purchases are encouraged and made,” Sorte said.

As counties change, so do county fairs, especially in their demographics. For example, Sorte found increasing engagement from Latino communities in fairs and fairground events. Most important, county fairs serve as gathering places for local people across cultures, ages, and professions.

“County fairs are pushing against a strong tide of social isolation,” Sorte said. Social capital builds when local people gather—when backyard farmers talk with growers, when 4-H kids sell their livestock at a local auction, when cottage industries set up booths. The ‘warranty’ may be knowing that future problems can be worked out among friends,” Sorte said.

When you hit the brakes in your car, tiny particles of copper dust are sheared off your brake pads and deposited on the road. This dust may end up in streams and rivers, where it is linked to an increase in predation of young salmon.

When a salmon is attacked by a predator, a chemical cue is released from the skin that signals danger to nearby fish. These fish smell the predation cue and adjust their behavior to avoid being eaten. But when they’ve been exposed to copper, their sense of smell shuts down.

Oregon State University researchers, working with scientists from the National Oceanic and Atmospheric Administration, found that juvenile salmon exposed to low levels of copper in their environment had an impaired sense of smell and were less responsive to these alarm signals. At elevated concentrations of copper, predator avoidance signals were largely nonexistent.

The level of copper contaminant used in the study was at or below current federal regulatory guidelines for heavy metals, said Jeff Jenkins, an environmental toxicologist in the OSU College of Agricultural Sciences. Levels of copper as low as two parts per billion have a direct impact on the sensory systems of juvenile coho salmon.

“It’s just like they were poisoned,” said Jenkins. “Of all the chemicals we have looked at, this effect was clearly happening at levels well below the current copper standards for water quality. It raises the question of whether the current standards are as protective as we thought.”

As a result of automobile braking and exhaust, higher levels of copper contamination have been observed in streams close to roads and highways. Building materials and certain pesticide formulations are also important sources of copper in western landscapes, said Nat Scholz, a researcher at NOAA’s Northwest Fisheries Science Center and one of the project’s researchers.

The study results are applicable to fish species in urban watersheds worldwide, said the researchers.

Here’s a new reason to ask for “Sunny-Side-Up”

The incredible edible egg is regaining its reputation as a health food after years of being linked to high cholesterol and cardiovascular disease. 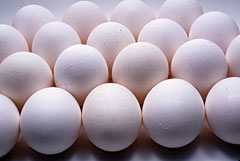 Recent research has shown that eggs can be enriched with conjugated linoleic acid (CLA), a long chain fatty acid that when eaten in moderate amounts may increase antioxidant activity and help rid the body of cholesterol and fats.

CLA occurs naturally in the fats of ruminant animals like cattle and sheep and in the dairy products derived from these animals, said Gita Cherian, a researcher in OSU College of Agricultural Sciences. “CLA is a component of fat. As the western diet has shifted toward low-fat and processed foods and away from meats, whole milk, and cheeses, we have inadvertently removed much of what we need to be healthy.”

Cherian has found that chicken eggs become enriched with CLA when hens eat feed enriched with synthetic forms of the fatty acid. The hens then act as an intermediary, turning synthetic CLA into natural CLA, which is more effective at reducing heart disease in humans.

As people continue to shy away from animal fat and red meat, CLA-enriched eggs and products made with them, such as mayonnaise and baked goods, may be a way to deliver vital nutrients to the diet.

Cherian continues her work on the health effects of CLA-enriched eggs, funded by a Linus Pauling Institute Pilot Project Grant.