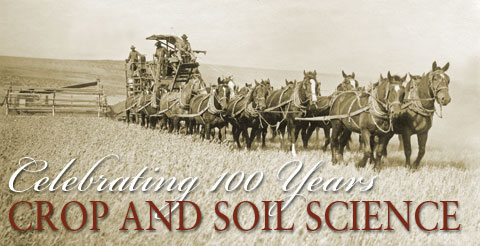 With powerful new tools unimaginable a century ago, OSU scientists nurture Oregon's bounty above ground and below.
By: Carol Savonen
Twitter Facebook Google+

Traveling across the continent or across the sea to settle in the Pacific Northwest, early immigrants brought with them something more precious than gold—seeds to grow their food. In fact, wheat seed was once accepted as legal tender in Oregon, according to an 1845 territorial law that allowed debts to be paid with wheat as currency.

Once pioneers chose a place to settle in the Oregon Territory, they spent years figuring out which of those seeds grew well in their new home and which didn’t.

“Early settlers had to be good crop growers, or they wouldn’t have survived,” explained Russ Karow, head of OSU Crop and Soil Science Department. “Today, we are still studying what to grow and how to best grow it. But now we have more tools to understand how to breed better crops and how to address problems such as plant diseases, soil erosion, and weeds.”

Agronomy was one of the first fields of study when Oregon Agricultural College opened in the nineteenth century. The disciplines of crop and soil sciences were formally established as departments in 1907, and researchers have worked closely with Oregon growers ever since. Following World War II, the nation shared a new sense of optimism that technology would solve many of agriculture’s problems. Widespread use of new chemical fertilizers and pesticides, many of which were technological spin offs from the war effort, fueled a worldwide Green Revolution. Modern agriculture experienced huge increases in crop yields.

“But, we’ve become aware that for each action, there’s an equal and opposite reaction,” said Karow. “We have realized there are problems like herbicide drift, groundwater contamination, pesticide resistance, and gene drift.” New tools, such as computer imaging technology, geographic information systems, and satellite imagery, are allowing scientists to address these problems and make better land use decisions.

Modern tools have increased production and knowledge at many levels, and they have heightened awareness of how much we still don’t know. “We are learning that there’s no such thing as a quick and simple fix,” said Karow. “There are no ‘silver bullet’ answers. It has forced us to move away from reductionist-type thinking. We are thinking more about Mother Nature again.”

Today, OSU crop and soil researchers have access to tools unimagined a century ago. But the questions they ask are still based on improving the quality of life in Oregon. They study hundreds of crops that grow in the rich and varied agricultural areas of Oregon.

Take wheat, for example, Oregon’s early currency. During the early days of wheat research at Oregon Agricultural College, crop scientists focused on trials, not breeding. They tested varieties of wheat from around the world to see which performed the best in Oregon’s diverse climates. They studied how to grow, harvest, and use the best varieties. In 1947, the Oregon Wheat Commission began support for OSU wheat breeding and research programs, financed by a self-imposed tax on growers. The next year, Wilson Foote began the first wheat breeding experiments at OSU, crossing one kind of wheat with another to create new varieties suited to local conditions.

Warren Kronstad took over the program in 1967 and advanced new varieties of wheat for Oregon and the world. At the height of his career at OSU, Kronstad’s varieties dominated the Pacific Northwest wheat industry, an industry worth almost $186 million in Oregon in 2006. “Stephens” soft white winter wheat, a variety released by Kronstad in 1978, is disease-resistant and adaptable to a wide variety of growing conditions. It still makes up more than 30 percent of the soft white wheat planted in the Pacific Northwest today.

Varieties of soft white winter wheat continue to be the mainstay of Oregon’s wheat industry. These low-protein wheats are exported to the Far East and used in Asian noodles, sponge cakes, cookies, and flat breads. The OSU wheat-breeding program has recently added a “noodle lab.” There, cereal chemist Andrew Ross delves deep into the wheat kernel to find the key components in Oregon wheat for making the highest quality products for worldwide markets.

“We are breeding for more diverse markets and purposes than in the past,” said James Peterson, who took over the OSU wheat breeding program in 1998. “We are providing our wheat growers with more options, in the form of new varieties, new traits, and different market classes.” As in Kronstad’s day, it still takes 10 to 12 years to develop a new variety of wheat. Peterson and his team have been busy. They released “Tubbs,” a new soft white wheat, with an 8 to 9 percent yield increase over “Stephens.” And they have new soft white, hard white, and hard red winter wheat varieties in the pipeline, ready for release during the next two years. In addition, two new varieties of herbicide-resistant soft white “Clearfield” winter wheat have been developed using traditional, non-GMO breeding methods and released in collaboration with the private sector.

Peterson and his team also have developed a special, “super soft” variety of wheat that is extra high quality, with a lower protein content, exclusively licensed to Mid-Columbia Producers. This super-soft variety is a premium product, analogous to Northwest microbrews or gourmet coffees, with extra quality that can generate higher revenues in today’s marketplace.

“The world grain market is increasingly demanding and sophisticated,” Peterson said. “If we are to remain competitive, the OSU wheat breeding program must develop varieties with superior quality and encourage production and marketing in ways that can preserve their identity and capture value.”

The quality of the crop emerges from the quality of the soil. A century ago, OSU soil scientists began conducting many of Oregon’s earliest soil surveys. Whether by foot, horseback, bicycle, or rowboat, they mapped the state’s soils, acre by acre. They measured slopes and erosion hazards and made notes of vegetation. They dug pits six feet down to study the layers of color and texture, and took samples back at the lab to analyze soil structure. These surveys continue, providing specific information crucial to land use decisions from farming to construction.

“Most of us old-timers got our start on soil survey crews,” said J. Herb Huddleston, retired OSU soil scientist. “That’s how we learned all about soils.”

Until recently, these surveys were recorded on paper maps. Today soil surveys are digitized, published onto a CD, and posted on the web. Jay Noller, an OSU soil scientist, mines these massive data sets and other data from satellite imagery, to compile information ranging from topography and climate to humans and microbes.

“All these factors are interrelated and influence each other,” said Noller, an international leader in digital soil mapping.

When he heads into the field, Noller collects field data digitally with what he calls a GPS diary, a hand-held computer unit and a global positioning system that always shows where he is. “I walk a landscape and I text-message notes to myself,” he explained. “I take digital photos and make sound recordings as well. When I get back from the field, I just download all this information, all automatically keyed to a location. I can click anywhere on a digital map and get all the info from any exact spot. These new technologies allow us to collect more information in less time and to capture it permanently.”

Mining these data, Noller can generate a map of a new area, a multiple variable electronic map that can predict the soil types with up to 90 percent accuracy. “Humans are spatially biased,” explained Noller. “We tend to avoid mountain peaks and steep valleys, so there are fewer data collected from hard-to-get-to places. Satellites and other forms of remote sensing have no spatial biases. They sample all the potholes and peaks.” Noller and his graduate students are using these methods to complete soil maps across more than 10 million acres of land in Oregon, a project in collaboration with the Natural Resource Conservation Service.

Gathering so much information so easily can create new challenges, says Noller. “People expect analysis quickly. A soil survey map used to take up to 20 years to complete. Now people expect it after 3 to 5 years. But there are still many human decisions and judgments involved in the process.”

Although digitized data have replaced paper maps, paper is not an archaic substrate when it comes to Noller’s teaching. He asks students in his course, “Soil Landscape Analysis,” to put away their computers and take up old-fashioned sketchbooks and pencils. “Before my students go digital, they must first master conventional landscape drawing,” he said. “I take them out and teach them to really see a landscape by sketching it. This reinforces the concept of negative space. In a landscape, what is not there is as important as what is there. You need to learn to see.”