Taking It to the Streams 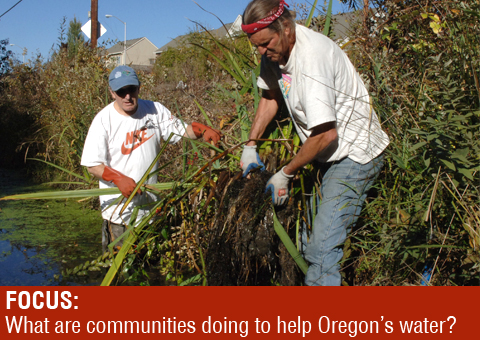 Taking It to the Streams
OSU’s Master Watershed Stewardship Program marshals a legion of volunteers to care for neighborhood streams.
By: Gail Wells

Deep in a scummy holding pond, smack at a busy suburban intersection, sweating in the summer sun, Jack Shorr and Chip Hall shoveled foot-square plugs of iris rhizomes from the mucky bottom and heaved them onto the bank.

A fine summer-vacation chore for a teacher? Chip Hall thinks so. “I love doing stuff like that,” he says with a smile. “After a year of teaching middle school, it’s a nice break and a great workout. But it did take us hours and hours.”

The focus of Shorr and Hall’s labor is one of two storm-water retention basins for Barrows Creek, an unprepossessing little stream that runs through a housing development along Beaverton’s western boundary. It has been straightened, channelized, and converted into a series of step ponds to handle the runoff from suburban streets and driveways. Like most of metropolitan Portland’s waterways, it is no longer a fish-bearing stream. It is not beautiful, nor does it offer much in the way of recreation, unless digging invasive plants out of the muck is your idea of fun.

Nevertheless, precisely because the landscape around it has been so dramatically altered, Shorr and Hall believe Barrows Creek is worthy of loving attention. Along with a small army of other volunteers and partners, they have cleared the creek and ponds of blackberry, iris, and other invasives and planted the five-acre creek and pond area with nearly 2,000 native trees and shrubs.

They are now in the second year of their five-year plan to bring Barrows Creek closer to its natural condition. Recent sightings of mallards, mergansers, green and blue herons, kingfishers, red-winged blackbirds, and songbirds attest to the effectiveness of their work and the resilience of the land.

Indeed, Shorr and Hall have put in far more than the required 40 hours by now, although it hasn’t all been grunt labor. A big part of being a Master Watershed Steward is forging partnerships with other members of the community—pulling people together to accomplish together what no one person or group could do alone. Their main partner on Barrows Creek is Clean Water Services, Washington County’s wastewater and storm water utility, which steered them to the project initially. Since then, they have made alliances with nonprofit groups, jawboned with neighbors, horse-traded for services: “We’ll deliver the Boy Scouts; you bring the porta-potties.” In fact, local Boy Scout troops have been key partners in the cleaning-up and tree-planting efforts, as has the nonprofit agency SOLV (Stop Oregon Litter and Vandalism), which co-sponsored a recent work day in October, recruiting more than 100 volunteers and supplying snacks, tools, and, yes, porta-potties.

The Master Watershed Stewardship program was born in the mid-1990s, when watershed councils were first forming to work on collaborative, voluntary ways to improve habitat for salmon. “Watershed councils were brand-new animals,” says Derek Godwin, a co-leader of the program. Members often didn’t know what a watershed was or how to work with others to improve one. “Oregon State University stepped in,” says Godwin, an Extension Sea Grant watershed management specialist, “because we realized that people who were trying to work together in this new way needed some knowledge and training to help them make more effective decisions.”

OSU Extension faculty developed eight workshops on forest and stream ecology, soils, salmon biology, and methods for working successfully with others. They took the first workshops to watershed councils in mostly rural areas along the Oregon coast, where restoring salmon habitat was the state’s most urgent concern. But as the program began to attract positive reviews, says Godwin, it became clear that watershed health was not only a rural problem. Now co-leader Sam Chan, the program’s urban watershed specialist, and Godwin are shaping the watershed stewardship program to meet the needs of residents in rural–urban interface zones, like the one Barrows Creek occupies.

“Originally,” says Godwin, “we targeted people who wanted to be in watershed councils. Now we see ourselves as training community leaders generally. They may be involved in their local watershed council, or they may do some other form of local service. It’s all good”

Shorr and Hall are the kind of leaders Godwin has in mind. College classmates, old friends, and avid outdoorsmen, the two are recently retired from Portland Public Schools. Shorr lives in Beaverton a few miles from Barrows Creek. He did not come to watershed stewardship, as many do, because of a connection to a local stream. Rather, when he retired, he said, “I felt I still had something left to give.” He trained to become a Master Gardener through a similar OSU Extension program, then he found out about the Master Watershed Stewards program. Hall joined Shorr, and together they took on Barrows Creek as their qualifying project.

Both have high praise for the watershed program. “Each week we’d have a different expert give the presentation,” says Shorr, “We heard professors from OSU and other experts from state and federal agencies. We took field trips, walking alongside a stream and talking about where the streamflow was originally, what the banks used to look like, how to restore the native trees and shrubs, how to determine whether it’s a healthy ecosystem or not.”

“From a water quality perspective,” he says, “the project is small when compared to the entire Tualatin drainage. But through the community events they’ve organized, Jack and Chip have generated awareness and ownership in people whose backyards are part of Barrows Creek—that is invaluable.”