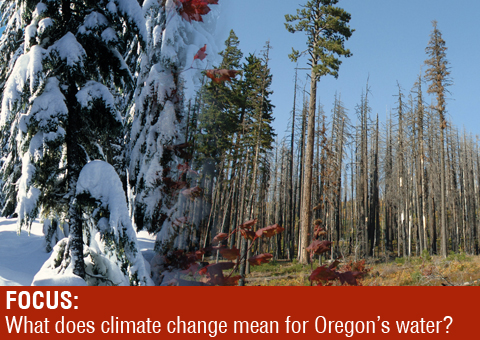 Precipitating Change
Six OSU experts weigh in on what climate change might mean for Oregon's water.
By: Steve Dodrill

George Taylor, Oregon State Climatologist: Looking at records that start in the mid to late 1800s, the warm periods have been relatively dry and the cool periods have been relatively wet. I think the thing that drives these cycles is a phenomenon called the Pacific Decadal Oscillation. Within that oscillation, El Niño events tend to give us mild and relatively dry winters. La Niña events tend to be cooler and wetter. That doesn’t necessarily suggest that a warmer climate in the future would be a dry climate; El Niño events may increase in number, or decrease, or stay about the same. It’s very difficult to know.

In some periods when we have multiple dry years in a row—as we did in the late 1980s and early 90s—then things can really get bad. We have situations where there just isn’t enough water to go around. I think that water shortages may become more common in the future, even if the supply—the precipitation—doesn’t change, because demands will almost certainly increase.

Ron Neilson, Botany and Plant Pathology: Warming temperatures may make less snow in the wintertime, and the snowpack is our main reservoir of water. The spring runoff could peak one to two months earlier in the season, which potentially would leave less water for all uses later in the summer.

Ecosystems are the dominant user of water, transpiring water in proportion to leaf area and evaporation. Vegetated ecosystems use available water in the soil during the growing season to put on as many leaves as they can. If the growing season gets a little longer—and in a warmer climate it could increase by weeks in the springtime—vegetation could use more of its stored water earlier. Plants transpire more in hotter summers; and if the season extends longer, ecosystems could run out of water in the soil before the end of the growing season. Vegetation could decline in density or die back. We’re currently seeing these drought effects in ecosystems throughout the West, followed by increases in insect infestations and fire.

If vegetation uses up the available water and dies back, then precipitation in later seasons flows into streams, increasing the risk of flood and erosion. In time the ecosystem may regrow with fewer leaves and re-equilibrate to use less water in hotter, longer growing seasons.

Michael Campana, Institute for Water and Watersheds: Even if we shut off all the carbon emissions tomorrow in the whole world, global warming would continue, certainly for the remainder of my lifetime and probably my children’s lifetimes. So we need to prepare. Storms or droughts may change in distribution and intensity. That could mean more problems with flood control, erosion, and water quality. If the snowpack is melting earlier, that water will need to be stored somewhere for irrigation and municipal use in the summer. That could mean building more dams or developing aquifer storage systems.

Michael Harte, director, Marine Resource Management: A warming climate is something that people need to be aware of, but not fooled into thinking that it is the one thing that is going to drive the availability of water resources for agriculture, hydro generation, salmon, and recreational activities. Climate change—global warming—is only one influence to consider here in Oregon. It is different in other parts of the world, but in Oregon it’s just one factor to take into account.

One of the biggest threats to Oregon from climate change is population increase. California and Arizona are facing major water shortages in the future. People in these states—and I say this somewhat tongue-in-cheek—may want to move to Oregon, increasing the pressure on our water resources even further. So it’s not the direct impacts of climate change that may cause our biggest water problems, but the implications of climate change elsewhere.

Richard Adams, Agricultural and Resource Economics: We don’t have to look to the future to see the effects of changing water resources. All one has to do is look to the last 20 years of water transfers in much of the arid West, where agricultural communities—no pun intended—“dried up” economically because the water they depended on was sold off by individual landowners to larger cities who bought it for their own urban expansion.

Colorado is probably the best example, where cities north and south of Denver began a search for water, buying it from agriculture at relatively high prices. These were voluntary trades, the individuals were happy to sell their water and quit farming. But that had a trickle-down effect on the local economy. The suppliers—fertilizer dealers and tractor dealers—were affected and the tax base was reduced. Water supplies will be more uncertain and dealing with this uncertainty will be a big challenge, adding to challenges we already face.

Gail Achterman, director, Institute for Natural Resources: We do need to aggressively reduce greenhouse gas emissions. But in the meantime we’re going to have to adapt to climate change. We get a tremendous amount of our electric power from a hydroelectric system. But because of changes in the snowpack and the timing of the runoff, we will have to make adjustments if we want to maintain the capacity and reliability of our hydro system. A lot of our municipal water supply systems rely on reservoirs, but if the result of warming is less rainfall, how will this affect water availability in terms of quantity and timing? The same question arises for our irrigation system—the foundation of much of our state’s agricultural economy.

Take a simple example. If all your culverts have been sized on a 50-year storm event and now your 50-year storm event is going to be significantly bigger, then every street with culverts will have to be resized or they’re going to be blown out during high-intensity storms. We will need a strategy to deal with this kind of major capital infrastructure adaptation.

To hear more from these experts, visit our audio links.

‹ Waterwise in Central Oregon up Taking It to the Streams ›

Taking It to the Streams
Repairing the Commons
Wet & Wild