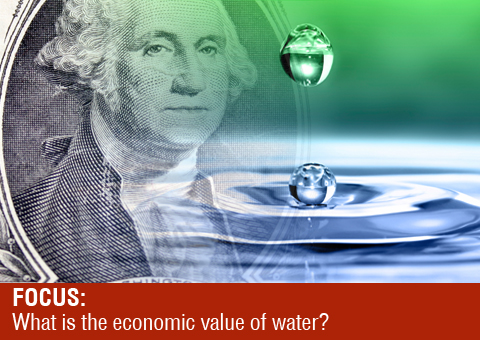 Liquid Assets
Like the air we breathe, water is difficult to price.
By: Peter Weber

Everybody agrees that water is valuable. But just how valuable? Like the air we breathe, we would notice water the most if it weren’t there—say, if we turned on the tap and nothing came out. But like air, water is difficult to place a price tag on. That doesn’t keep Oregon State University researchers from trying to understand the value of water—and how we can get the most value out of the water we have.

Under Oregon’s 1909 foundational water law, the state and federal governments own all the water in Oregon. So technically speaking, you can’t buy or sell surface water or groundwater in the state. But water clearly has value—the City of Corvallis, for example, has priced its tap water at about 2 cents per cubic foot, or a third of a cent per gallon delivered, for an average single-family home. Farmers use most of Oregon’s water to irrigate crops, so perhaps no other group pays as much attention to the costs of water usage.

Greg Perry, an agricultural economist and interim head of OSU’s Agricultural and Resource Economics Department, described a 1999 study in which he and colleagues tried to determine the market value of irrigation water in several Oregon counties by determining how much a water right added to the value of a piece of land. “A direct market—buying and selling water—allows you to get a true value for water,” Perry said. “But if you don’t have that kind of market in place, the best way to get at the price of water is to try to tease out the underlying value of the water by using the land value, both with and without water rights.”

Water has the most value when tied to land with good-quality soil, which can be used to grow crops that yield high profits, and good-quality land is most valuable when it has secure access to water, said William Jaeger, an OSU economist and resource policy specialist. In Oregon, the farther back your water right was granted, the higher the priority of your legal claim to water in times of scarcity. The best land doesn’t always have the highest claim to water, however, which can lead to an inefficient use of water resources.

Perry and Jaeger note that the price of water, like most commodities, is higher when or where the amount available is insufficient to meet demand. “A lot of people think of Oregon and say ‘Well, it rains a lot, so water must not be a problem,’” Jaeger said. “But in fact water availability is quite seasonal and a problem in many areas. Even in coastal areas that are quite wet, there are problems with water supply not meeting demand.”

A demand for water for a variety of uses exceeded the available supply in the Klamath River Basin in 2001. In that drought year, the U.S. Bureau of Reclamation curtailed irrigation deliveries to meet federal mandates under the Endangered Species Act. For the owners of about 1,200 farms, that meant that the water they were expecting for irrigating their crops was suddenly unavailable.

Jaeger was one of about 30 economists, agricultural scientists, sociologists, and other researchers from OSU and the University of California who studied the causes and effects of the 2001 water curtailment in the Klamath Reclamation Project. Jaeger’s analysis found, among other things, that some of the most productive lands had been denied water, while some less productive lands continued to be irrigated. Had there been a mechanism to shift water from less productive to more productive lands, Jaeger estimated that more than two-thirds of the economic costs from the curtailment might have been avoided.

“For such voluntary transfers to occur, however, a fully functioning water market or water bank would be needed, and we are not yet in a position to have that happen,” Jaeger said. “There is no eBay for water in the Upper Klamath, at least not yet.” Such a system in which farmers could buy, sell, or trade water rights among themselves is not currently feasible in the Klamath Basin, in part because priority among some 4,500 water rights in the area is still being sorted out in court and because accurate methods for measuring water usage are not in place. One key advantage of a water bank, according to Jaeger, is that it could give farmers flexibility and alleviate some of the uncertainty of farming.

Of course, the metrics used by economists—supply and demand, margins of cost and benefit—are not the only way to measure water’s worth. “How do you place a value on water?” asked OSU sociologist Denise Lach, who studies water and sustainability issues. “It’s priceless.

“From a cultural perspective, water allocation becomes a question about fairness and equity,” Lach explained. “There is nothing that can be substituted for water. Without it, biological beings—including humans—cannot live. All the water we have now is all we’ll ever have; it continually recirculates through our social, biophysical, and engineering systems. Where there is a limited availability of freshwater, allocation becomes an even larger equity issue among competing social and biological demands.”

Jaeger acknowledged, “People mean different things when they talk about the value of water. Some people think about water being an integral part of their way of life and essential to their community, and when you take away that water you take away their way of life. That is something that I, as an economist, can’t measure.” But, he added, “Some people may still be willing to sell or buy water at a price, and that price corresponds to the economic value of water.”