Dr. Tim Miller-Morgan wiggles his fingers into surgical gloves. They snap
against his wrists like rubber bands. On the operating table in front of him,
a sedated patient lies on her back. She was diagnosed with a parasitic infection
a week ago, so she has been undergoing treatments. Today, she’s in for a checkup.

Her name is Pebbles, and she’s a 3-foot-long, pointy-nosed wolf eel with a
ribbon-like tail that ripples like a flag in the wind. She lives at Oregon
State University’s Hatfield Marine Science Center in Newport.

Miller-Morgan gently probes her beet-red gills where microscopic flukes had
previously hindered her breathing. He snips off a speck-sized piece of tissue
that he will later examine under a microscope to see if any flukes remain.

Suddenly Pebbles stops breathing. Worried, Miller-Morgan quickly lifts her
out of the sedative-laced bath and puts her into water without the tranquilizing
drug. Time seems to stand still as Miller- Morgan gently holds her head. “She’s
slowed down more than I like,” he says. Then ever so slightly her mouth opens
and closes. Everyone relaxes. Pebbles will be fine. And the flukes, it will
turn out, are gone. 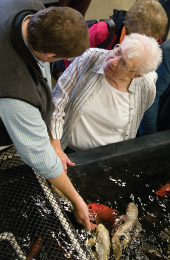 "You're kidding!" A visitor reacts as Tim Miller-Morgan introduces her to friendly koi at the Hatfield Marine Science Center Teaching Lab in Newport. Photos: Lynn Ketchum 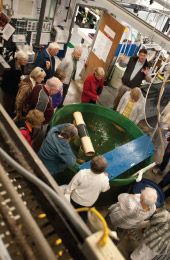 Welcome to the watery world of Miller-Morgan, the aquatic veterinarian with
Oregon Sea Grant Extension at OSU. He’s a busy guy. As the head of OSU’s Aquatic Animal Health Program, he teaches importers, retailers, hobbyists, college students,
and veterinarians how to care for underwater pets. He has no shortage of people
to educate. In the United States alone, 14 million households own 183 million
fish, according to a recent survey by the American Pet Products Association.

One of the best ways to see his impact is to visit the annual Northwest Koi
and Goldfish Show in Portland. Koi shows are like dog shows, except the fish
don’t look like their owners. A couple of years ago, Miller-Morgan and his
assistant, Dennis Glaze, were asked to inspect the hygiene and handling practices
at the show to prevent the spread of disease. Hygiene is important at shows
because koi are big business. Miller-Morgan once performed abdominal surgery
on one valued at about $5,000; and he recalls one person paying $70,000 for
a single koi.

“They look at it as living art, as if they’re purchasing a living Picasso,”
he says, explaining why someone would fork over a down payment on a house to
buy a fish.

Of particular concern to koi owners is the contagious and deadly koi herpes
virus, which inhibits breathing and can wipe out entire ponds. “It’s nasty.
If it gets into your pond, any surviving fish are infected for life,” Miller-Morgan
says. Because koi can have the virus but not show symptoms, he and several
OSU colleagues are trying to indentify tissue in which the koi herpes virus
hides, the genes expressed during latency, and factors (perhaps temperature)
that activate the virus. They aim to develop a test that would indentify carriers
by looking for the DNA of the virus.

“The OSU team is doing some of the best koi herpes virus research in the country,”
says koi judge Grant Patton, of South Carolina, who sits on an Associated Koi
Clubs of America committee that awarded OSU the funding for the research. If
successful, their work would make koi buying less risky. Miller-Morgan recalled
how one man lost his entire koi collection, worth $250,000, when he added a
single fish that had not been screened for the virus. It was Miller-Morgan’s
colleagues at OSU’s veterinary diagnostic laboratory who made the difficult
diagnosis. 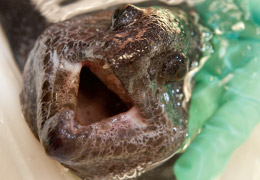 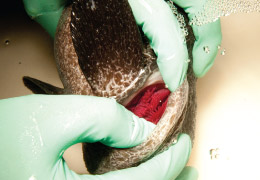 Miller-Morgan’s expertise is recognized throughout the country and abroad.
He has taught seminars in about 25 states as well as in Australia, India, Indonesia,
and Israel. He helped write the curriculum for a yearlong online course called
the Koi Health Advisor program, which trains volunteers across the nation to
care for koi and teach hobbyists how to properly care for their own fish. He’s
traveled around the country to teach the hands-on part of the course. Along
those lines, he also helped develop the aquarium science program at Oregon
Coast Community College, where he also teaches.

Many of the most popular ornamental fish species are collected in tropical
waters far from U.S. shores. How those fish are handled during their transport
from reef to aquarium greatly affects their health and survival. Miller-Morgan
has seen reef fish in Indonesia sit on a boat in plastic bags of water for
up to three weeks before they’re sent to an export facility. That’s useful
reconnaissance for U.S. buyers so they don’t shell out money for stressed-out,
malnourished fish that die shortly after touching down on American soil.

Miller-Morgan collaborated with Sea Dwelling Creatures, an ornamental fish
wholesaler in Los Angeles, to develop methods for safely transporting healthymarine
ornamental fish. He helped them take blood samples, track water quality, and
study how shipping impacted the fish. Working with the in-house veterinarian,
he developed handling procedures that give the fish more time to acclimate
to the water in their new tanks and eliminate unnecessary use of certain chemicals.
He also accompanied staff members to Indonesia to work with suppliers there
to improve the health of the animals. “Dr. Tim is awesome,” says co-owner Eric
Cohen.

As any good doctor, Miller-Morgan can be found making weekly rounds of his
patients, in his case at the Hatfield Marine Science Center and the nearby
Oregon Coast Aquarium. With clipboard and flashlight in hand, he checks the
vital signs of snooks, wrasses, red drums, anemones, hairy hermit crabs, jellyfish,
and the rest.

It’s hard to miss him. Silhouetted against the floor-to-ceiling tanks, his
6-foot-5-inch frame towers over most visitors in the dark exhibit rooms. He’s
a relaxed man with a gentle touch that can put sharks in a sleep-like trance.
Maybe it’s all the years watching fish peacefully float by in aquariums that
have given him such a calm demeanor. Yes, aquariums are good stress-relievers,
he says, as long as you’re not the one maintaining them. Although he doesn’t
own any fish, he does have a favorite: the spiny lumpsucker, an inflatable,
golf ball-sized cutie with fins that stick like Post-It notes. And his favorite
fish to eat is tuna. Just don’t tell his patients.

One Tuesday morning finds him at the Oregon Coast Aquarium checking out a
tank of tetras. Earlier, some tetras had died in this tank; he’s trying to
nail down the cause. He’s looking for physical and behavioral abnormalities:
ulcers, tattered fins, changes in color. A fish that’s swimming with its mouth
open could mean gill problems, or one that rubs its belly along the tank bottom
could have skin parasites.

Detective work is part of his job. Earlier this year, Miller-Morgan and an
aquarist noticed that Deriq, a 40-pound octopus at the Hatfield center, was
barely breathing or moving. They took him to the hospital ward where he soon
died. Deriq the octopus was the star attraction at the center and had developed
a fan club thanks to a webcam in his tank that streamed live video of him onto
the Internet. He even had his own Facebook page, which listed his interests
as swimming, changing color, eating, playing with toys, and taking things apart.
The day after his death, his Facebook page was filled with condolences.

Did metals leach from the camera in the tank? Was it something in the water?
Miller-Morgan autopsied Deriq and lab work revealed that a parasite had infected
his liver, intestines, and heart. Working with colleagues at the OSU School
of Veterinary Medicine, Miller-Morgan suspects that the parasite came in on
crabs that Deriq ate.

Finished with the tetras, Miller-Morgan moves on to a tank where a dozen sea
pens should be displaying their orange plumes like peacocks. Instead, “they
have an unhappy, ‘I’m itchy’ look,” he says. Earlier, flea-like amphipods had
been chewing on the sea pens, and now protozoans are pestering them. Irritated,
the sea pens have retreated into the sand. Miller-Morgan recommends to the
aquarist that he put them in a different tank where they can be washed in a
mild formaldehyde mixture and then run fresh water through their display tank. 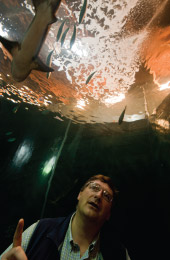 Next, he walks to the aquarium’s warehouse-like hospital ward. A few years
ago, an Animal Planet television crew filmed him there, gluing a contact lens
onto the ulcerated eye of a rockfish, inserting a feeding tube into a sea dragon,
and tending to a skate with a sore on its back. This time his patient is a
rockfish with a half-inch-deep gouge on its snout. Miller-Morgan had treated
the wound earlier and now, strapping on a headlamp, he checks his patient’s
progress. The sedated fish looks at him, helpless. But Miller-Morgan knows
to be careful: the spiny dorsal fin is a weapon. Yes, his job is not without
risks. He was once bitten by a skate. “I was demonstrating how jaw movement
returns before respiration—and it did,” he says.

He runs his hands down the side of the fish to check its muscle mass. The
thrashing animal splashes water on his shirt. It’s losing equilibrium, the
doctor explains. Fish in this phase can jump out of their containers. He jokes
that the probability of a fish jumping out of its tank is directly proportional
to the value of the fish, which means this one is very likely to stay put.
He dabs at the wound with a piece of white gauze. “We’re seeing some good healing
but you’re looking at a year to a year and a half,”he says. “It could be six
months before this fish is back on display.”

Rockfish can be easily caught off the coast and purchased at the grocery store,
but Miller-Morgan treats this one with the same tender care as he does with
more expensive or exotic species. From tiny tetras to snake-like wolf eels
to human-size sharks, all of his patients get equal treatment.

“They’re animals, and when we bring them into captivity we have an obligation
to take care of them no matter what they are,” says Miller-Morgan, who has
a framed copy of the veterinarian’s version of the Hippocratic oath on his
office wall. He tucks his headlamp into his paramedics bag. He’s headed back
to the Hatfield center to brief a room of concerned volunteers on the death
of Deriq the octopus. It’s just another day at the office for the OSU fish
doctor. 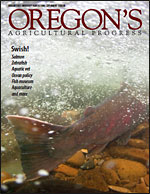 Hatching Dreams for a Better Life

A Tern for the Better

Night at the Museum